It is the Year of the Ageless One, 1479 by Dalereckoning, and a century has passed since two worlds touched, the deity of magic was slain and the Spellplague was unleashed. And fewer than three decades ago, the city of Neverwinter was touched by a new cataclysm, major earthquakes triggered by the eruption of Mount Hotenow.

Reduced to ruins, Neverwinter rises from the ashes to reclaim its title as the Jewel of the North. Yet even as its citizens return and rebuild, hidden forces pursue their own goals and vendettas, any one of which could tear the city apart.

And along come the PCs to vie for glory in the city once known as the Jewel of the North….

Hallmarks of a Neverwinter Campaign

(This is taken from Storm Over Neverwinter, the first D&D Encounters adventure for 2013, and seems to really encapsulate what this campaign should be like so I am repeating it here.)

Neverwinter is a setting designed for the players to become deeply involved and for their choices to drive the story at every turn. What the player characters decide to do matters for themselves, for the people of the North, and perhaps for people far beyond. The following section describe some of the key characteristics of the Neverwinter setting.

The player characters in a Neverwinter campaign can make a difference and change things, for good or ill. This is not a setting where the heroes are stuck facing flunkies of the villain because their enemy is an epic-level threat. Whether they like it or not, the adventurers are on their own, and what they decide to do matters.

The destruction of Neverwinter made the North into more of a wilderness than it has been in centuries. People rebuild the city, but law’s reach is not long and order’s grasp remains weak. Things as simple as the shipments of food to the city can become sources of desperate conflict and dire events. In such a place, individuals such as the player characters can be the linchpin that holds everything together or the factor that forces the wheels to come off the cart.

Everyone wants something: the characters, normal folk, secret cults, rebels, mercenaries, invaders, assassins, conquerors, looters, would-be kings. Neverwinter presents many organisations and non-player characters with a multitude of plans. The heroes can interact with all these groups, discovering secret ploys, allying with some, making enemies of others, and playing them against one another or taking them all on. Allies can become enemies and enemies can become friends; it’s up to the players to decide.

The Story Goes On

Many settings describe the world as it is and make it seem like it wil1 always be that way. The important individuals are necessary to the setting and forever out of reach of the player characters. Not so in Neverwinter. If the characters do nothing, something will still happen. If they go after and kill the big names in the setting, the story doesn’t end — it gets more interesting.

This is where it all begins: The Beached Leviathan is a former pirate ship that ran aground in the Docks. Rather than repair and re-float it, its master, Captain Harrag, chose to leave it where it was and turn it into a tavern and inn.

Many a new adventurer starts his career in Neverwinter in the Beached Leviathan – just as your characters are about to do.

Tears of Selûne – in progress

Bones of the Thunderbeast – not yet started

There are some differences between this version of Neverwinter and that presented in the Neverwinter Campaign Setting. Factions have been added, other factions have been removed, and names and loyalties of NPCs could be different (if not very different) to those that have been published. And, in at least one case, the gender of an NPC has been changed.

However, geography is the same and it is still the Forgotten Realms with its multitude of deities and power groups all looking for proxies with which they may shape this world… or, in other cases, unshape it….

There are only a few but house rules can be found here.

This is a Fan Site 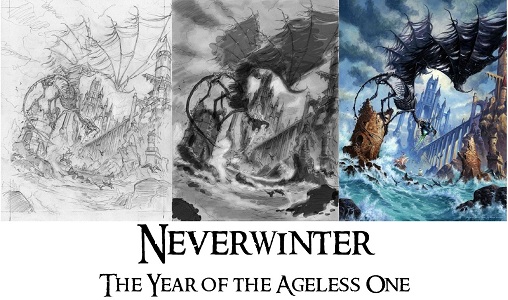 Coincidentally, the Moonsea is one of my favourite places so I’m looking forward to reading your campaign also!

Thanks for the kind words. Cheers.

Neverwinter is one of my favorite places! Thanks for making this available for others to enjoy!

I'm sorry, but we no longer support this web browser. Please upgrade your browser or install Chrome or Firefox to enjoy the full functionality of this site.